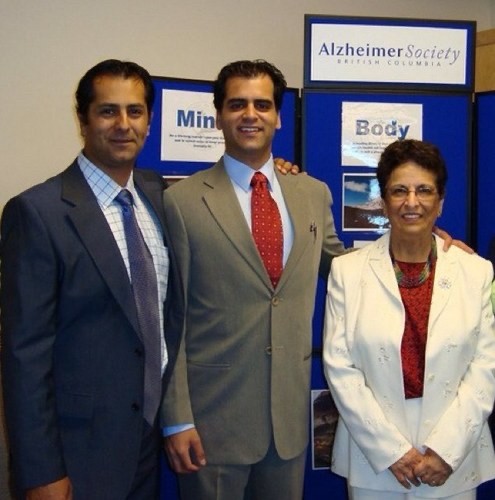 From a young age, Aly Devji has felt fortunate to have been surrounded by residents of long-term care homes. “I was essentially raised by residents and their caregivers as my mother and father took me to work with them to the care home when I was just six days old,” he says.

In 1976, Aly’s parents, Jane and Amin, began operating the former 48-bed Ladner Private Hospital, along with their partners at the time. Over the years, the Devji family assumed its full ownership and began creating a dementia-friendly care organization. The organization grew to become the 292-bed Delta View Campus of Care, which the Devjis sold in 2018.

In the early days, Jane, a registered nurse, took on the role of hospital administrator while Amin, who passed away in late 2021, focused on maintenance and expansion. Aly and his elder brother Salim worked in their parents’ care home in Delta, as well as a Nelson-based care home the family owned for a period in the 1980s. Aly and Salim helped with housekeeping, meals, maintenance and administration and learned from their parents that there was a better way to care for people living with dementia. Jane mapped out her vision for a purpose-built environment for dementia care and under Amin’s direction, the family built and opened the 80-bed Delta View Habilitation Centre on their property in East Delta. Using the gentle care philosophy and a mission to reduce and eliminate both physical and chemical restraints, the “Hugs not drugs” approach to person-centred care began at Delta View and continues today.

“People living with dementia and their caregivers will experience many changes and it’s important for them to feel a part of the care home family,” Aly says. He believes that when a visiting caregiver is having a difficult time, they should feel supported by the care home and its staff members. “It is a journey we are part of,” he adds.

Aly, now CEO of Langley Lodge, believes in creating a care home environment that emphasizes hospitality. He looks forward to seeing the entire sector improve the satisfaction among residents, staff and other community members and sees the importance of building therapeutic partnerships with caregivers by including their insights to help provide person-centred care. “By guiding caregivers to the right resources, perhaps we can improve their health and well-being to prevent them from needing care down the line,” he says.

Following in his mother’s footsteps, Aly has developed strong relationships throughout the continuing care community, including with the Alzheimer Society of B.C. Among initiatives the family has participated in to support people affected by dementia, Aly climbed Mount Kilimanjaro with Jane and Salim to fundraise for the Society – twice. In 2009 and 2013, when she was 71, Jane relived the hike she had completed as a young adult in her home country of Tanzania with her two sons in order to help raise funds for dementia support.

“We need more people to understand and face dementia together,” Aly says. “A lot of people are afraid to address the concerns they have and don’t realize that they can make a difference.”

Join the Devji family on Sunday, May 29 for the Delta IG Wealth Management Walk for Alzheimer's. Together, we make memories matter.